Today Talong residents are refusing to meet with U Sai Sam Tip, Shan State Minister of Electricity and Energy, and his team, who are coming to Talong village, Hsipaw township, to promote the Upper Yeywa dam on the Namtu/Myitnge river in northern Shan State.

Talong lies on the banks of the Namtu/Myitnge above the Upper Yeywa dam, currently being built by Chinese, Swiss and Japanese companies, despite its location in an active warzone. Once the dam is completed, the reservoir will submerge the entire village of nearly 700 inhabitants – as well as ancient historical sites and fertile agricultural lands. 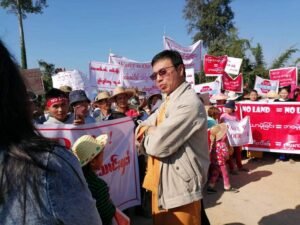 “We have called again and again to cancel the Upper Yeywa dam, but the government has ignored our calls. The Minister is just coming to promote the dam, so why should we meet him?” said Nang Lao Kham, a Talong villager.

Talong village is well-known for its sweet, organically grown oranges. Many villagers own at least 2 acres of orange orchards, earning them 19,600,000 kyats (12,937 USD) income per year. 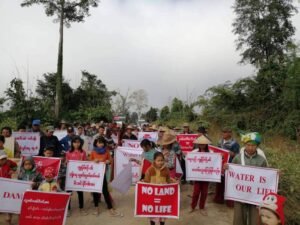 Three other large dams are being planned on the Namtu/Myitgne river, including the giant 735 megawatt Middle Yeywa dam planned by Norway’s state-owned SN Power in Nawng Khio township, over the Kyaukkyan fault line — the centre of the biggest earthquake in Burma’s history. This is fuelling fears that the weight of dam reservoirs may trigger damaging earthquakes, as in Laos, where a 6.1 earthquake last week was likely triggered by the recently completed Xayaburi Dam on the Mekong River.

Shocking photos of the dried up Mekong River downstream of the Xayaburi Dam have also caused alarm.

“If a giant river like the Mekong is reduced to a small stream, what will happen to our beloved Namtu?” said Nang Lao Kham.